Promoting human rights and environmental balance before audiences the world over

Eco-Imperialism author Paul Driessen, CORE, CFACT and their colleagues frequently give lectures, organize and participate in special events and programs on college campuses, speak to business and professional organizations, testify before Congress, and appear on radio and television programs.

Driessen takes his place at the subcommittee witness table

University of Minnesota, Minneapolis
March 23, 2004
Sponsored by the Committee For A Constructive Tomorrow (CFACT)

“But just as there is a circle of life, there is also a circle of death. It connects policies that perpetuate poverty, disease, malnutrition and early death – and will continue to do so as long as ideological groups are allowed to dictate choices for the developing world.” Paul Driessen (from his PowerPoint presentation) 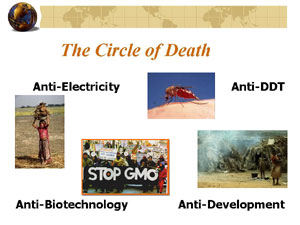 “Worldwide, over a billion people still don’t have access to safe drinking water. Over 2 billion still don’t have access to electricity or sanitation. Life for these people would be infinitely better if they simply had abundant, reliable, affordable electricity.” Paul Driessen (his 2-hour UW-M talk and discussion were taped by C-SPAN and subsequently broadcast on its Book-TV program) 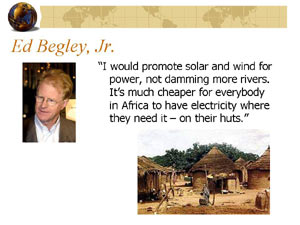 “A single 555-megawatt gas-fired power plant generates more electricity in a year than do all 13,000 wind turbines in California. The gas-fired plant requires a mere 15 acres. The 300-foot-tall windmills impact over a hundred thousand acres, destroy scenic vistas, and kill thousands of birds and bats every year.” Paul Driessen (from his PowerPoint presentation) 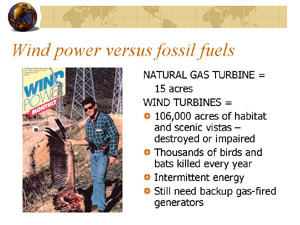 “Four million infants, children and mothers die every year from asthma, pneumonia and tuberculosis – caused by breathing the smoke, dust, bacteria and pollutants that are a constant fixture in their homes and villages.” Paul Driessen (from his PowerPoint presentation)

Paul Driessen spoke about the environment and Eco-Imperialism.

“Malaria infects 300,000,000 people a year – more people than live in the entire United States. It kills 2,000,000 every year – more than the population of Houston, Texas. The vast majority are in sub-Saharan Africa, and nearly 90 percent of them are children and pregnant women.” Paul Driessen (from his PowerPoint presentation) 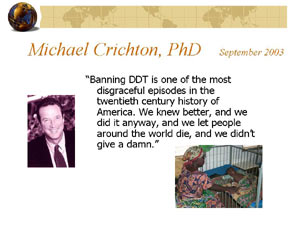 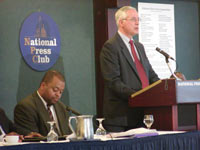 Driessen and Innis at the Earth Day seminar

Driessen spoke to local business leaders about CSR and eco-imperialism.

“Today, American and European activists can afford to oppose DDT. They live in wealthy, malaria-free societies. But their inhumane anti-pesticide policies against poor countries mean hundreds of thousands of children and parents die every year who would live, if their countries could also use DDT…. Supporting anti-DDT policies is not moral, ethical or socially responsible. It is a violation of these people’s most basic human rights. ” 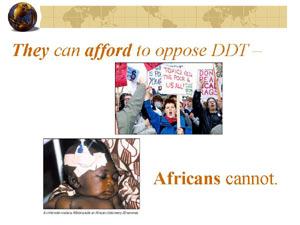 “I am delighted that Ms. Bandell and her colleagues are making human rights and corporate social responsibility keynote topics at this meeting. But meanwhile, their organizations are working overtime to promote policies that help to impoverish and kill people – violating their human rights, and then claiming their policies are moral and socially responsible.” (Paul Driessen, from one of his four statements) 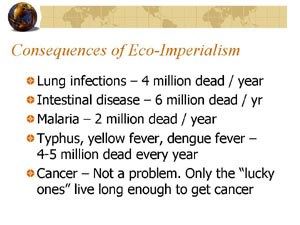 Driessen spoke to students and faculty about threats to biotech progress.

“Over 200 million children suffer from Vitamin A Deficiency. Genetically engineered Golden Rice would help prevent blindness and save lives. Just two ounces a day will suffice – not the 4 pounds a day that anti-biotech radicals claim they would need.” Paul Driessen (from his PowerPoint presentation)

“We need to demonstrate why it is wrong to demand environmental purity – and then impose the costs for that purity on people who have little or no say in the debate or its outcome. We must underscore the injustices that are being imposed on the world’s poorest citizens, including countless children, whose most fundamental human rights are being violated every day.” Niger Innis 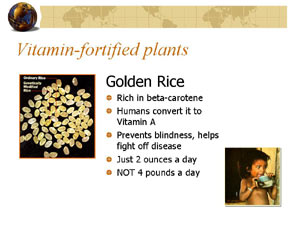 “My friend’s little child hasn’t been able to walk for months because of malaria,” Fifi says. “Her family doesn’t have the money to help her, and neither does the Ugandan government. All they can do is take care of her the best they can, and wait for her to die.” Paul Driessen (from the second of his three lectures to college and graduate students)

“Cute, indigenous customs aren’t so charming when they make up one’s day-to-day existence,” says Kenya’s Akinyi Arunga. “Then they mean indigenous poverty, indigenous malnutrition, indigenous disease and childhood death. I don’t wish this on my worst enemy, and I wish our so-called friends would stop imposing it on us.” Paul Driessen (from his PowerPoint presentation) 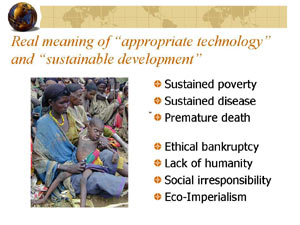 “Environmental activists and even some businesses hold these terms up as a lighthouse, an ethical beacon, for companies and citizens to follow – supposedly to create a cleaner, better, more just world. I don’t think that’s accurate. The fact is, these terms have been defined, interpreted and imposed to promote particular political agendas.” Paul Driessen (from his talk)

“It’s a primary reason I became active in the emerging environmental movement during and after college.

Today, in part because of the initiatives we helped to launch back in the early 1970s, the river is clean. You can swim in it, and eat the fish, and nearly a dozen pairs of eagles nest along the riverbanks, not far from my family home.” Paul Driessen (from his presentation)

“We must insist that ‘environmental ethics,’ ‘environmental justice’ and ‘corporate social responsibility’ reflect the needs and concerns – not of self-proclaimed stakeholders – but of people who actually have to live with the consequences of these political decisions.” Paul Driessen (from his debate points)

“A new African proverb captures the situation almost perfectly: ‘We must become white, before we can become green.’ Before people in developing nations can be expected to respond favorably to developed country concerns about the environment, they must end the poverty, disease and malnutrition that are ravaging their communities.” Paul Driessen (from his concluding remarks)

Eco-Imperialism and human rights on radio and television

Michael Corbin Show: February 18, 2004 – nationally syndicated and live on the Internet at www.4AcloserLook.com

Jerry Agar Show, Charlotte, NC: March 31, 2004 – WPTF 680 AM and via the Internet at http://www.carolinajournal.com/nctalkradio/

Derry Brownfield Show, syndicated throughout the Midwest and beyond: June 4, 2004 – Common Sense Radio and www.DerryBrownfield.com

Todd Hickman, Beaumont, TX and beyond: August 31, 2004 at 8:30 pm – NewsTalk 560 AM, plus www.BottomLineRadio.net and www.SaveMyRetirement.com