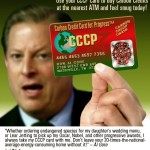 “Agenda 21” was first introduced to the world at the 1992 UN-sponsored “Earth Summit” in Rio de Janeiro. It addresses virtually every facet of human life and describes in great detail how the concept of “sustainable development” should be implemented at every level of government.

“Agenda 21 proposes an array of actions which are intended to be implemented by every person on earth…. It calls for specific changes in the activities of all people.… Effective execution of Agenda 21 will require a profound reorientation of all humans, unlike anything the world has ever experienced.” [emphasis added] Agenda 21: The Earth Summit Strategy to Save Our Planet, United Nations (1993)

“The Sustainable Development Challenge Grant program is also a step in implementing Agenda 21, the Global Plan of Action on Sustainable Development, signed by the United States at the Earth Summit in Rio de Janeiro in 1992. All of these programs require broad community participation to identify and address environmental issues.” Environmental Protection Agency, 63 Fed. Reg. 45157 (August 24, 1998).

On January 26, 2012, I attended the final meeting in Batavia, NY for the Finger Lakes “Regional Sustainability Plan,” part of New York State Energy Research and Development Authority’s $10 million statewide program to have regional Planning Departments orchestrate “sustainability” plans described in NYSERDA’s “Cleaner, Greener Communities” Program.  Following is my take onwhat is going on across New York State in regard to these extensive plans in the making.

As those who have studied the United Nations’ “Agenda 21” plan know, “Sustainability” is a key buzzword that is part-and-parcel of the UN’s Agenda 21 agenda. It’s also meaningless and malleable– allowing activists and planners to bend and shape it to serve their agendas.

There is no doubt that the “Sustainability” Plan currently being devised by Planning Departments across the state, all of which are acting “under NYSERDA’s thumb” (as one planner phrased it at their first meeting in Batavia), is Agenda 21, under development and in practice (think carbon taxes, “green” energy transfer-of-wealth schemes, and one-world governance). No wonder the Hollywood crowd loves sustainable development, Agenda 21 and Al Gore.

At the “open-house style” meeting in Batavia, folks were asked to read the poster boards relevant to each part of the overall plan: Land Use, Water Use, Agriculture, Forestry, Waste Management, Economic Development, and Energy – and then use sticky notes to post their comments on the boards for each particular segment of the plan.

Free-market economists sharply differentiate between central government planning and decentralized market planning (See F.A. Hayak’s, Road to Serfdom, pages 34 – 35). Thus, while many see little wrong with developing an overall plan, remember that their coercion crowds out your own planning. And while different aspects of the extensive plans look good at first glance, the devil is in the details.

The fact that NYSERDA is the bureaucracy overseeing this process is the tell-tale warning sign, as the development of renewable energy across the state and ways to regulate hydrocarbon use and carbon dioxide emissions is the overarching goal in each area of the plan.

This should leave everyone very wary about the remaining $90 million – which came from the Northeast’s Regional Greenhouse Gas Initiative (RGGI) ratepayer dollars, and which will be offered as “grants” (the proverbial “carrots” used to lead the sheep) to guide our communities into “compliance” with the overall underlying agenda – that of Agenda 21.

Who knows where the money will come from for Governor Cuomo’s proposed billion-dollar “Green Bank” and $1.5 Billion dollar Solar fund?  Remember when Obama President Obama said there were other ways of “skinning the cat” besides cap-and-trade?

One of the biggest warning flags I noted at the meeting (besides the “green” energy push and carbon regulation goals) was on the chart regarding “Land Use.” I noted one line that said, “Home Rule” interferes with inter-municipal cooperation.…” The obvious subliminal message here is that “Home Rule” is a bad thing.

Our municipalities’ long-held, Constitutional right to “Home Rule” is being progressively undermined through this whole process of State-led planning. We are unwittingly, slowly and methodically giving over total control to unelected bureaucrats, planners and activists, who are devising these “green” “sustainability” plans – which are part and parcel of Agenda 21 (which many officials and bureaucrats insist they still know nothing about).

The sad reality is that most of these planners are not at all educated about energy and power. As I was getting ready to leave the meeting, one of the FL Planners asked me what I had thought of the display.

I told him straight out that the obvious push for “unreliables” (aka “renewable”) like wind is a complete waste of our tax- and rate-payer dollars. I told him that while I am certainly all forscientifically-vetted, economically-sound energy-innovation, industrial wind was the biggest scam to ever come down the pike.

Sadly, he responded with the decades-old propaganda line, “Well, we have to do something. Oil is responsible for so much of our pollution.”

He tried to argue that eventually we would end up going to all electric vehicles. I just laughed, and said, “Sir, I’m afraid you’ve drank the Kool-Aid! I couldn’t even make it home and back in an electric car.” And imagine trying to recharge car batteries using expensive, intermittent, bird-killing wind turbines!

Thankfully, a local guy who does get it stepped in and said, even if electric vehicles became more prevalent, they could never be used to do the kind of heavy work required on our farms.

As our conversation proceeded, we had the attention of the entire small crowd that was in the room – which played out great, as the facts totally destroyed this planner’s entire argument.

Not one of the five planners who were there knew what “Capacity Value“ was, nor that wind provided virtually NONE. I told him that wind is not the future, and in all actuality, there is a direct correlation between RELIABLE, AFFORDABLE power, and increased health and longevity in this country, which he could verify by doing a little research.

I ended up leaving a copy of John Etherington’s The Wind Farm Scam: An Ecologist’s Evaluation and Robert Bryce’s Power Hungry: The Myths of “Green” Energy and the Real Fuels of the Futurewith one of the head planners there.

Hopefully, they will actually read them and reverse course, so that New York State can cut its budget, preserve the environment, and safeguard our neighbors’ quality of life and property values – all at the same time. As it is now, the energy-illiterate planners guiding the development of (UN-initiated) “Sustainability Plans” in New York State (Governor Andrew Cuomo and his cohorts at NYSERDA) are not basing their decisions on sound science, but on politics surrounding the UN’s “New World,” state-supported religion of “Environmentalism.”

As Paul Driessen stated so well: “Climate alarmism and pseudo-science have justified all manner of regulations, carbon trading, carbon taxes, renewable energy programs and other initiatives that increase the cost of everything we make, grow, ship, eat, heat, cool, wear and do – and thus impair job creation, economic growth, living standards, health, welfare and ecological values.”

Whether the “Sustainability Plans” are in New York State or Timbuktu, there is nothing at all that is “sustainable” about any of this.

Mary Kay Barton is a retired health educator and New York State small business owner, and a tireless advocate for scientifically sound, affordable and reliable electricity for all Americans. She has served over the past decade in local water quality organizations and enjoys gardening and birding in her National Wildlife Federation “Backyard Wildlife Habitat.”